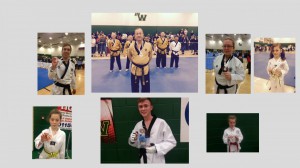 Stoke UTA Taekwondo led by their coach and Instructor Master Peter Johnson from Sneyd Green, took a eight strong team to the NTC Nottingham Taekwondo Championships at the wildcats arena last weekend, to One of the biggest tournaments of the year Over 250 competitors in the forms section competing on the Saturday and over 300 in the fighting section competing on the Sunday. Stoke UTA fielding players in the Forms and Fighting. This being the last major tournament of the year and with the team fresh from their recent success at the Quest Open Sheffield it was Important that the team finished the year strong and ready for the new season in 2016. Master Peter Johnson led the Forms team on the Saturday in the Senior Black Belt under 60 years Division against one of the strongest entry’s to date in his division. It was his last year in the under 60s and he was to go up into the over 60s in 2016 with his eyes set on the Forms World Championships in Peru 2016, so all his opponents were younger than him and some higher Dan grades so this was a Challenge for Johnson. But with a tough training regime, Johnson went into the final and took gold in an excellent performance leading the way and taking the first medal for his club.

Next up was James Beardmore from Sandbach in the senior under 40s Black belt section James who took a Bronze at Quest in Sheffield took a silver medal in the senior pairs division and a great third place bronze in the Senior Individual adding to the Stoke UTA medal Tally.

Then Phillipha Hockham from Newcastle in the under 30s female Dan Grade section took a silver Medal in the Pairs Division.

Then in his first ever Forms Competition Wayne Nicklin from Bucknall in the Senior Dan under 50s section came 5th in his division just missing out on a podium position, but a great start for Wayne and invaluable Experience.

Young Sophie Kennerly aged 9 from Sandbach was next up in the Pee wee A class female division Sophie taking a Silver in the quest Open in Sheffield managed to get yet another excellent Silver in a tough and large category, Sophie a member of the junior National Poomsae squad had achieved her goals for 2015 and was now looking forward to more in 2016

Finally young jack Pickin from birches head, fought on the Sunday, jack former national champion and commonwealth medallist, and junior British team member was up and on the mat to start his campaign for Selection for the Junior Worlds in Mexico in 2016 , into the quarter final against Ryan Butt he took the win easily to go to the semi-final against a relative unknown player from who took Jack right down to the wire and was leading jack by one point in the final three seconds when jack saved the day with a great three point back kick to take him to the final . Jack then met a unbeaten player from           who gave jack an excellent fight and was dominating jack in the second round , but jacks experience on the GB junior squad paid off and a flurry of head kicks took the win and jack was crowned NTC Champion. Coach and Competitor Peter Johnson was delighted with the result and this was the last competition of the year and we wanted to go out on top as two world championship places were at stake next year and this has but both myself and jack in strong contention for places on the GB forms and fighting teams.