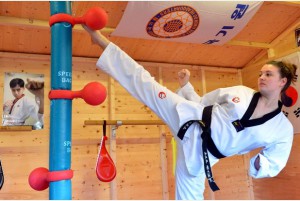 Comments (0) AMY Truesdale has launched her bid to qualify for the 2020 Paralympics by retaining her European title for a third time.

The Stoke UTA star has already started preparing for Japan in five years’ time, when the martial art will make its debut as a Paralympic sport.

The fourth annual European Championship, in Moldova, gave her a chance to gain ranking points and attracted more competitors in all divisions compared to 2014.

She beat Kadriye Turget, from Turkey, 13-7 in the semi-final, before going onto defeat Gamze Gurdal, also from Turkey, 22-13 to claim the K44 plus-58kg gold medal.

“I’m very pleased with my win and happy with the competition and the way it was organised,” said the 25-year-old, who was born without the lower part of her left arm.

“I put a bit of pressure on myself as the European Para Championships have opened entries up to all countries, not just Europe, and overall I think I did well.

Truesdale suffered a thigh injury as she secured victory in a tactical match against Turget, but recovered to convincingly see off relative newcomer Gurdal.

Stoke coach Peter Johnson, who watched from the side in Moldova, says this tournament was a chance for Truesdale to lay down a marker in a new era for the sport.

He said: “It was important that Amy retained her title as this was the first competition with ranking points for 2020.

“This was an excellent win and makes her three times European champion in a row, with a world title and Commonwealth title also under her belt.

“She is making history. She is one of the only Para competitors to compete in all World Championships since Azerbaijan and the first GB Para athlete to hold world and European Taekwondo titles.”