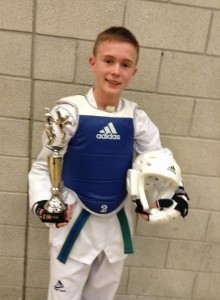 JACK SELECTED FOR GB SPORT TAEKWONDO TRIALS
More good news today as we have heard that our National Fighting Champion Jack Pickin has been invited to the GB Sport Taekwondo trial Camp next week, Jack who has already attended a day’s training and selection day at ten Acres Gym in Manchester received confirmation by E-mail today that he will be going this Tuesday and spending two days at the Cadet and Junior Trials. This is a stepping stone on the GB talent pathway and Jack who is British National Champion, British National silver Medallists and London International Champion along with numerous other titles. This is another great achievement for Jack and Stoke UTA Taekwondo ,

With the news Today that Stoke UTAs Jack Pickin is heading off to Manchester for Trails  for GB Junior Fighting development Squad , Stoke UTA are leading the way in WTF Taekwondo in staffs and throughout the Area , Stoke UTAs World Para champion Amy Truesdale possibly heading for Olympic Inclusion in 2020 and also Amy Competing in the Commonwealth fighting in November , with Two Stoke UTA members competing in the Commonwealth Poomsae  and WTF Citations for Stoke UTAs Coach Master Peter Johnson Stoke UTA is surely the Club  leading the way in the Midlands and throughout the country ! Not only in fighting but forms this is an even bigger boost for our club . No other organisations have so much depth in Taekwondo .  Well done to Jack, Amy Bethany and the rest of Stoke UTA for their Support and dedication !