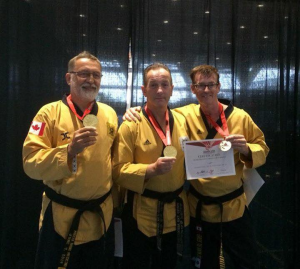 Master Peter Johnson travelled to Vancouver Canada to try to retain his Title that he has held for two years running with a high Score of 6.89 he took  Gold in his Division and as a part of Super September this is the third Gold along with his team , competing at the Scottish Open , Liverpool Open and Canada , with just the Manchester Open to complete this would seal a Super September for Johnson and his Team !