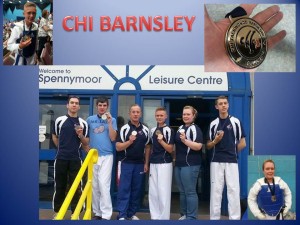 Stoke UTA took Six players to the Chi competition in Barnsley this weekend and Came away with two Gold Medals and four Silver medals in Both Fighting and Poomsae Young Jack Pickin won stopped his opponent in the third round of his final match to take gold , Pippa Hockham got silver in her fight narrowly missing out on a points Victory Peter Johnson Gold in His Poomsae group and Silvers for James Beardmore Rhys Morgan and Calum Johnson in Poomsae