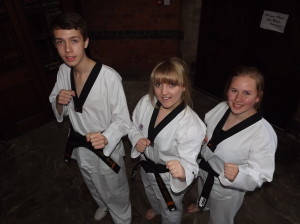 The United Taekwondo Association of Great Britain held its 53rd Dan grading in Stoke on Trent at the Wallace Sports and Education Centre. This is one of two Black Belt Grading’s   held yearly, the other in October in Falkirk Scotland.

Candidates from all over the country were to grade on the Sunday, Scotland, Manchester, Stoke, Milton Keynes, and Northern Ireland. Three Students were to grade from the Stoke UTA Taekwondo club and they were graded by the Highest Taekwondo Masters in the country.  Grand Master Tong Wan Shin 9th Dan , Master David Bailey 7th Dan  and Master Glen Culbert 6th Dan from Northern Ireland .

The grading is one of the hardest in the United Kingdom with candidates having to perform technical movements both hand and foot techniques, Forms and Sparring and destruction test, followed by a written examination.

After a hard and Technical Grading all three Students from stoke were successful and received their Black Belts and Grades from master Shin 9th Dan .

Coach Master Peter Johnson who hosted the event in Stoke was not surprised of the result as the Students had worked hard all year to achieve this result !