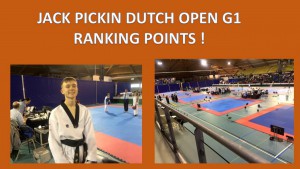 Jack Pickin Stoke UTA Star and GB Development Player Travelled to Eindhoven for the Dutch Open , to compete for ranking points for the Junior Worlds s , Jack went though the perlimanys and Beat the French Champion in a fantastic fight 17-14 then Jack came up in the Quarter Finals against the German Champion and holding his own in the first round , turned his ankle in the second round to be with drawn with injury , the German went on to win the division , jack getting a 7th place out of 32 competitors gained valuable ranking points.