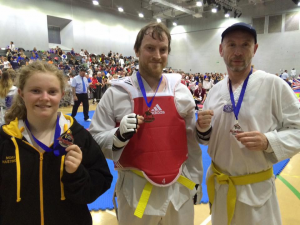 but strong new team , three players took to the mats going through to the finals at the Liverpool Open with young Nora Hastings in the Novice section coming up against a Black belt Dan grade from Scotland and chasing her right to last round only to be defeated by a small points gap , a great first outing for Nora and a great silver medal for the Club , Next up Daryl Mier in the novice senior section , yellow belt Daryl coming up again against a Dan grade black belt but fought well for his first fight in the final and took another Silver for ur Club Finally Craig Astbury in the Novice section went through also to the final losing narrowly to a strong fighter from Ireland a couple of deductions for head punching took Craig out of a gold medal podium position but Craig added to Stoke UTAS tally of three silvers for three players a great result !