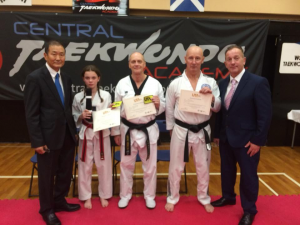 Stoke UTA came away with three new Dan grades at the recent UTA Dan grading in Scotland ! Promoted to 4th Dan Stoke UTAs Wayne Nicklin did a great performance and Stokes Rob Murphy and Kacey Titley also came away with their 1st Dan grades ! The grading the highest WTF Dan grading panel under Grand Master TW Shin 9th Dan and one 8th Dan and two 7th Dan masters  in GB was held in Falkirk  and the standard is the highest in the country !