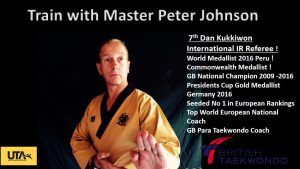 Stoke on Trent’s Master Peter Johnson 7th Dan Kukkiwon and International referee IR ! Has had over forty five years of teaching coaching and competing in WTF Taekwondo ! He is a World Medallist and holds Commonwealth National and Numerous International Titles including twice National GB Champion ! He has trained and coached World , European and Numerous National Champions , and teaches WTF Taekwondo full time ! He trains everyday and has Clubs in Stoke on Trent and Cheshire ! Master Johnson leads from the front and has a proven record of Producing Champions in Fighting and Forms to World level ! He is Also UTA Vice Chairman and GB Para Taekwondo Coach, so forget the rest train with the best !