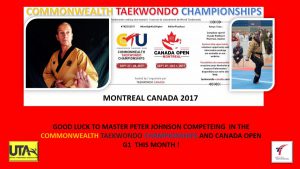 Master Peter Johnson Stoke UTAs Chief Instructor and World Medallist is to Travel to Montreal Canada this Week to compete in two back to back G1 ranked tournaments !

He will be competing first in the CTUs Commonwealth Taekwondo Championships , in the forms section , already holding a commonwealth bronze title from Scotland he looks to improve his podium position ! Then after two days he will compete in the Canada Open G1 ranked competition which he won in 2015 and wants to retain his title , two competitions back to back will be hard work but master Johnson has world , European and commonwealth titles and experience and is double national champion !