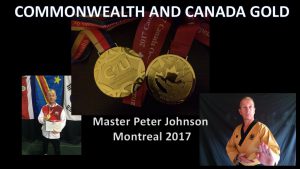 Stoke UTAS Instructor and Competitor Master Peter Johnson travelled to Montreal Canada to compete in two back to back G1 Competitions the Commonwealth Taekwondo Championships and the Canada Open G1 competition , both competitions over five days and over 1200 competitors master Johnson took gold in the CTU commonwealth games and retained his 2015 Canada open title by taking gold in the Canada open as well ! A great achievement and another title to add to his World European and national titles and Commonwealth bronze he took in Scotland 2010 !